Seriously. I’m done. Running with an injury has sucked all of the joy out of it. To make matters worse, I now have a second injury. Well, technically it was my first, but who is counting.

This sad story starts back in October. Exactly a week and a half after my half marathon. I went out for a “race pace” run the day before heading down to Florida to see family. The run went well and I technically got a PR on the run. I felt good and was feeling confident for my 5K that was coming up in a week and a half. The next morning I woke up with a dull pain in my left calf. It didn’t hurt all too much so I didn’t give it much thought. I went out for a few more runs through the weekend and following week. The calf pain didn’t bother me while running and it was never painful enough to raise a red flag for me. A week later when my right knee started acting up my focus shifted. And as I decreased my mileage for my knee, the calf pain almost disappeared completely.

I am not sure whether it was my bump in mileage last week, my 6 mile long run, or the 3 climbing sessions, but yesterday I noticed the dull calf pain was back. Again, it wasn’t significant enough to alarm me, but I noticed it. Then this morning, it was worse and as I got into my commute which has plenty of stairs, it got even worse. My calf was so sore that it hurt to cross my legs. I made an appointment for lunch time to see a sports medicine doctor.

The doctor was fairly certain it wasn’t clot because of the location of the pain. Phew. As he poked around he thought it could be some kind of strain and said it would be best if I took some time off running. I immediately said, “That’s not going to happen.” To which he replied, “Are you psychologically addicted to running?” “That’s besides the point.” is what popped into my head, but instead I told him about my guaranteed entry plan and that I had two more races — a 4 miler this Sunday and 15K (9.3 miles) next Sunday. He was very concerned about the second race. He asked me to take it easy for both, run/walking for both, and to not run at all other than the races. He recommended RICE, a high dose of anti-inflammatories, and compression socks. He also told me that he wouldn’t be surprised if my right knee issue wasn’t being caused by my left calf issue. As any runner knows, an injury typically leads to your body compensating in an unusual way that can lead to other injuries.

As we were talking through, he rechecked my calf and he noticed it was swollen. And he looked a little concerned. He made a phone call and told me he was sending me for an ultrasound for my calf to rule out a blood clot. Great. He asked me to email him afterward (if it wasn’t a clot) and we would make a plan from there. Luckily, the almost 2 hour visit to the diagnostics lab did not find a clot. It means that we don’t exactly know what is wrong, though, and that I can’t run.

I emailed the doc to see whether it is okay to climb and do any other sports while in recovery and am still waiting to hear back. I have a feeling he is going to want me to lay off anything that will use my calf. In the meantime, I skipped climbing tonight, came home and pulled on my calf compression sleeve and have been RICEing my calf and knee. I also took some ibuprofen. From what Dr.Google has told me, a calf injury can take 7-10 days to heal if it isn’t a tear. If I don’t run until my 4 miler on Sunday, that will be 7 days. Hopefully that will allow me to heal enough that I don’t do more damage. I’ll take it easy and then take off next week until the 15k if I have to. I’m nervous about running 9.3 miles with practically 2 weeks off of running, but I also don’t want to risk a tear.

This is not how I wanted to this to go. Things went so well with my training this year. I’d be lying if I said these injuries haven’t made me think about marathon training next year. I just keep trying to remind myself how much I progressed from the end of April when I started training for my 5 mile race to the half marathon in mid-October. A total of 24 weeks of injury free training while increasing my weekly mileage by 300% and my race distance by almost the same. Nine races in five months with two to go in the next two weeks. I just need to get through these next two races without permanent damage and take a break to recover fully. Marathon training doesn’t start for another 7 months. This is not how I wanted this to go, but I should still be able to complete my guaranteed entry. And that is all that matters right now.

And so it continues… my knee continues to be angry and I continue to try to train just enough to finish my last three marathon qualifiers safely. I got in two runs last week–a 3 miler and 4 miler. It’s my lowest mileage in months if you don’t count the 10 days I took off for recovery. On Tuesday of this week I headed out for an easy 5 miles. The knee was feeling okay before the run, during the run it was great, but after the run it felt horrible. My usual post-run yoga routine plus some foam rolling of my quad helped. (I think the rolling more than the yoga.) But by the time I had commuted in to work it was angry again. Yesterday it was bothering me even more. I RICEd it last night. Then today I broke out the old knee brace and wore it to work. This evening it continues to ache. I plan to do some conditioning exercises and roll out my quad again in addition to RICEing some more.

I ended up adjusting my training schedule earlier this week to be super conservative for the next few weeks. The plan was to get in the minimum miles that would make me feel confident for the 15k. I was supposed to run 2 miles today and decided it was better to postpone since I have a marathon qualifier on Sunday. I’d rather rest it and struggle a little during the race from deconditioning than go out and push the knee more and end up not able to run at all. It’s a delicate dance that I’m doing now between trying to stay conditioned enough to run these races while not injuring myself further.

I will definitely be taking time off after the 15k if my knee isn’t healed by then. It will be difficult mentally, but I can’t afford to have a perpetual injury going into the new year. In January I had planned to cut my mileage and focus on base building so taking time off shouldn’t be too big of a deal right now. Better now than going into marathon training already bashed up.

For the first time since August 2013, I have been injured and not able to run for 7 days. My knee had been a little upset in the days leading up to last Saturday’s race (race report coming soon) and I pushed for and achieved a PR in that race. The day after the race was the NYC Marathon and I was on my feet walking or standing and cheering for about 6 hours. After I got home on Sunday evening I noticed my left quad was pretty sore from pulling the weight from my sad right knee. Needless to say, by Monday I was in pretty bad shape.

My commute in to work is 3 flights down, .6 mile walk, 2.5 flights down, 5 minute train ride, 1 flight up, a very tall escalator spanning 4-5 flights, another flight up, a walk down a long platform, 5 minute train ride, then 2 flights up, another even taller escalator (it has to be at least 6 flights), then a .25 mile walk to the office. The commute home is all of that in reverse. I stayed home on Monday and Tuesday to avoid all of the walking and stairs.

When I left the house on Wednesday I felt good for the first half of the commute in, but considered coming back home by my transfer point. I ended up going ahead and heading in and iced my knee a few times at work. I had hoped to run that evening, but by mid-day it was apparent that wasn’t going to happen. Such was the pattern for Thursday. By Friday I had resigned myself to just trying to get in my Saturday morning team run. I wasn’t feeling well today so a run was out of the question.

I am now hoping to get out the door tomorrow. I have a 15k (9.5 miles) on 12/14 and my longest run since the half marathon in mid-October has been 5 miles. I am a little nervous about being properly trained for the 15k. I don’t intend to race it for a PR or the other two 4M races before it, but I do have to finish all 3 races for my guaranteed entry to the 2015 NYC Marathon.

I had hoped that a week off wouldn’t mean too much of a loss of fitness, but my SportTracks is showing that my fitness level has dropped to lower than it has been in 4 months when I did the 5 mile race and started training for my 10 miler. I haven’t been doing anything this week–not just not running, but no yoga , climbing, or strength/PT exercises either. Hopefully getting back into my normal routine will get me back on track quickly! 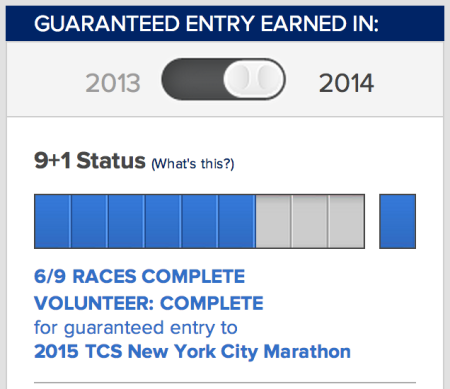